Ranked as one of the top Croatian tennis players, Borna Ćorić will be hoping to hit the kind of form that he experienced during mid-2015 in order to help Croatia relive those iconic moments in 2005 when they won the Davis Cup. At present, Coric’s form has dropped down from those heights and he is currently rated at 42nd in the world. Still, it represents a player who is more than capable of fighting his own when the going gets tough. At just 19 years of age, he represents the future of Croatian tennis if he continues at the same level of improvement.

Playing alongside the likes of Čilić at Davis Cup is likely to provide him with immense experience going forward. As one of the young tennis stars at the 2016 Davis Cup, his performance will be monitored on all fronts. At present, Coric has shown signs of dominating the French Open after going up until the third round in the last two seasons. At Wimbledon and US Open, though, he has struggled. One of the best performances from the 19-year-old so far came at the Cincinnati Masters where he reached the quarter-finals of the competition.

Strong with his forehand and backhand, Coric has already had some memorable moments in the game by beating the likes of Rafael Nadal and Andy Murray. In fact, he has managed to overcome the Spaniard twice since 2014. Coric has also managed to win seven out of the eight ATP Challengers and ITF Futures title.

19-year old Borna Coric stunned Rafael Nadal on August 18, 2016, at the Western & Southern Open, beating him in a match where Nadal was sluggish after missing two months because of an injured left wrist. Coric quickly surged ahead 4-0 in the 2nd set and closed it out in 1 hour and 11 minutes. 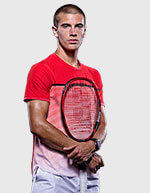