Argentina’s Davis Cup history is littered with a lot of failures especially in the finals. As one of the young and upcoming tennis stars from the South American country, Federico Delbonis made his career into a professional in 2007. Achieving a success rate of 67% in the competition, he experienced failure in the 2015 edition after Argentina were knocked out in the semifinals. As the sixth seed in the 2016 edition, Argentina are expected to go the full-length and win the title for the first time in their history.

Delbonis enters into the frame as one of the highest ranked Argentinians despite his poor form in 2016. The 25-year-old has not managed to reach the latter stages of a Grand Slam in his career. The best result of a third-round finish was recently achieved at the Australian open earlier this season. In the doubles game, Delbonis has also failed to go beyond the second round in any one of the Grand Slam. He may be ahead of Del Potro in the world rankings, but it is largely down to the experienced campaigner struggling with injuries of late. Delbonis could very well be asked to play a support role if Del Potro is on the song.

Yet, he has been picked by Argentina as one of the four to represent Argentina at the Davis Cup largely based on his recent performances. The lack of support to Juan Martin del Potro could be one of the biggest failures for Argentina at this event. Ranked at 41 at the start of September, Delbonis is a great option for the South American country if he manages to maintain his recent form. In terms of ATP career finals, Delbonis failed to win in his only appearance in the ATP World Tour 500 Series, but he was brilliant in the ATP World Tour 250 Series winning two finals and losing only one. 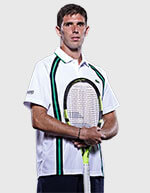