One of the latest entrants into the field of professional tennis from Argentina over the last couple of years has been Guido Pella. The 26-year-old has been performing consistently in the last 12 months and this has seen him peak at 115 – back in September 2015 – in terms of world ranking for the doubles game. Only recently has the 26-year-old been able to hit a career-high of 39 in terms of the singles rankings. These rises in terms of rankings demonstrate the player’s ability to fulfil his talent. Yet to win a Grand Slam title, Pella is also searching for his first Davis Cup success.

Pella has an impressive record at the Challenge career finals. After making an appearance in 10 games, he has managed to come out successful in eight. In fact, these eight victories came on the trot before the run was finally brought to an end by the loss against Alexander Zverev on May 2015. Pella, though, has been less than impressive win it comes to Grand Slam records. His rankings seem to have suffered primarily as a result of making no appearance even into the third round of a Grand Slam. His worst ever performance comes at Wimbledon, where he has failed to win any of the matches so far.

Pella was instrumental – alongside Juan Martin del Potro – to see through Argentina’s passage into the semifinals. The two combined to put Argentina in the 11th semi-final at the Davis Cup in the last 14 years. Pella is likely to team up with del Potro, who is Argentina’s biggest hope at the 2016 Davis Cup, for the doubles game as they are very first outing was successful with the quarter-final victory over Italy. Ending the winless run at the Davis Cup is likely to be one of the main priorities for Pella and his teammates. 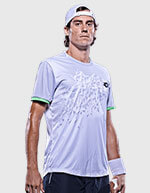