Croatian Ivan Dodig is a specialist at the doubles game and has been a key member of the Croatian Davis cup team for several years. Ranked at number four in the doubles game and a respectable 29th in the singles game, Dodig’s form will be key to Croatia being successful in the semi-final against France and potentially going on to meet either Argentina or Great Britain in the final. Dodig is one of the few Grand Slam winners from Croatia after having lifted the French Open doubles title with Marcelo Melo as his partner.

He has come close to winning the Wimbledon after ending up as a losing finalist in 2013. His other notable achievements in the Grand Slam timeline include an appearance in the semi-final of the Australian open as recently as in 2015. He has also finished as runners-up at the U.S. Open in 2013 and 2014. All these top-level successes ensure that Dodig provides a great chance for Croatia to dominate France in the doubles game. The 31-year-old was not a part of Croatia’s Davis cup success in 2005 and his best ever achievement in this tournament was reaching the quarter-finals in 2010.

His form in 2016 may be the only cause of concern, as the mixed doubles team with Melo exited the Wimbledon and Australian Open in the third round. They have largely dominated the Masters in 2016. The victory at the Canadian Open and Cincinnati Masters in the doubles game and should provide Dodig with confidence.

Melo and Dodig won their first title of the year at the Mexican Open after winning over Santiago Gonzalez and Mariusz Fyrstenberg 7-6, 5-7, 10-3. Last year, at the French Open, the two tennis players won their maiden Grand Slam title and this year saw them as a top seed at Nottingham Open. 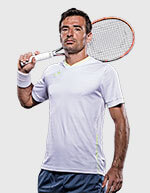