One of the instantly recognisable Argentinian tennis stars, the onus on winning the 2016 Davis Cup will completely fall upon the shoulders of Juan Martin del Potro. These are fragile shoulders since the player has suffered numerous injuries throughout his career. After spending a long spell on the sidelines, Del Potro has been inching towards his perfect form. Once ranked as the world number four, the 27-year-old will be expected to take on the best from the United Kingdom and this would include the two brothers – Andy Murray and Jamie Murray.

Del Potro has not been seen near the top of the world rankings for the last years. He has managed to sneak into the top 100 after a long gap and the highly talented star is expected to continue his improvement on the pitch. Del Potro’s solitary Grand Slam success came back in 2009, which says volumes about the injury and form issues faced by the player. After having missed a good chunk of the last two years due to injury, Del Potro reached the third round of the Wimbledon before exiting at the quarter-finals of the U.S. Open.

His biggest success 2016 came at the Rio Olympics after picking up the silver medal. Incidentally, he lost against Andy Murray, who is an opponent he is more likely to face in the semifinals of the Davis Cup. The last few months have been extremely good for the star, but the big question could be his fitness levels against players at the top of their game like Andy Murray. Betting on the possibility of success for Del Potro would be touch and go, given his injury problems, but he is a player who can beat anyone if he is at the top of his game. The lack of a serious partner for Del Potro in the Argentine squad could be the only concern. 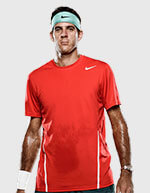