When it comes to sports, Britain have a history of using players born in other countries. This seems true in the case of tennis with Kyle Edmund the third best player – only behind Andy Murray and Dan Evans – as of now. However, he was born in South Africa and became a Brit only after moving to the United Kingdom at the age of three. Edmund is currently experiencing the best form of his career, which has also seen his rankings rise to top 50 levels for the first time. The Davis Cup is something not new to Edmund after being part of the team that won the final against Belgium last year.

Success in the 2015 Davis Cup was largely built on other players, as Edmund only made his debut in the final. However, he is a favourite to play against Argentina in the semi-finals of the 2016 Davis Cup. Compared with the likes of Dan Evans, Edmund has a better record when it comes to finals. He has managed to win 10 out of the 14 finals as part of the ATP Challenger Tour and ITF Futures Circuit competitions. Even though he has a disappointing record when it comes to the Grand Slam, it may not matter given his winning experience with the Davis Cup.

Edmund was at his imperious best in the U.S. Open and this helped him to comfortably overcome Richard Gasquet. This performance came just after helping Great Britain overcome Serbia in the Davis Cup quarter-finals. Edmund managed to cruise past the likes of Escobedo before succumbing to eventual champion Novak Djokovic in the fourth round of the competition. Edmund has rated his run at the U.S. Open 2016 as deeply satisfying in terms of the way he played. It remains to be seen if he can make it consecutive successes at the Davis Cup. 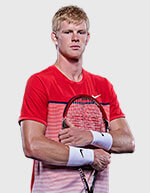