Another promising youngster to burst onto the Croatian professional tennis scene in the last couple of years has been Marin Draganja. The 25-year-old is in the prime of his career, but recent injuries have made it difficult for him to make an impact. Primarily a doubles player, Marin Draganja was once ranked 20th in the world a couple of years ago. He has never been a force in the singles game and it is reflected by his best ranking of 550 back in 2013. Draganja is likely to be utilised as a doubles player by Croatia when they meet France in the Davis Cup semifinals.

Draganja is trying to get his career back on track after a hip surgery forced him to miss a big chunk of his time in the game. The 25-year-old underwent hip surgery just over a year ago and the Davis Cup could see him arriving fresh at the tournament. As he was trying to make his name in the 2012 and 2013 seasons, Draganja proved his talent by winning 13 of the 16 challenger finals. In fact, this record gets better considering that two of those defeats came early on in his career. Draganja suffered only one defeat in 13 challenger finals spanning a period from August 2012 to April 2014.

At present, he is under the coaching of Gilbert Schaller and building fitness to his 2013 levels will be important priority for Draganja as he looks likely to receive a call-up to the Croatia Davis Cup 2016 team. Even though Draganja has recovered, we are a bit sceptical about his performance and do not believe he can climb too much from here. Time will tell, but the opponents at the Davis Cup seem stronger. 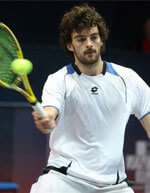